As mentioned on the previous page, syphilis in England and France's colonies was thought to be of a worse, "tropical" form that was more deadly and dangerous than what could be found in the metropole. In India, the disease was very much gendered, and in the view of the British, it was exclusively the diseased Indian women who were infecting the British with syphilis. [1] This phenomenon, paired with the British's belief that due to lax morals, all Indian women had the potential to be prostitutes, led to a belief of all Indian women as potentially syphilitic and dangerous. In Algeria, the image of the "syphilitic Arab" quickly became popular, and was linked to both a perception of extremely high rates of prostitution and a perception of high rates of homosexuality among Algerian men. [2] It was therefore more raced than gendered, in contrast to the Indian situation.

The image to the left, from French doctor George Lacapère's La Syphilis Arabe (Arab Syphilis) attempts to trace the evolution of this more deadly version of the venereal disease. As Amster notes, "French physicians between 1860 and 1925 consolidated the various rashes, sores, and birth defects observed in North Africa to invent a physiological racial type, the degenerate and diseased 'syphilitic Arab.'" [3] The realm of venereal diseases continued the French colonial project of pathologizing Islam, and this therefore applied to both men and women, but in different ways. As stated above, the prevalence of homosexuality and prostitution in Algeria were often mentioned together, and this was especially true in the case of syphilis. [4] The prevalence of syphilis was utilized to racialize the Algerians and evidence their supposed lack of shame and morality, but of course it was not only indigenous Algerians who were afflicted with the disease. In fact, the highest incidence of syphilis in the French army in 1893 was in the Algerian division. [5] 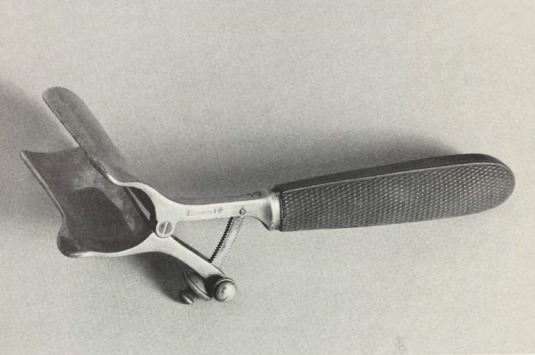 A nineteenth-century speculum, used for medical examinations of the vagina including the mandated examinations for prostitutes. Vaginal speculum (Weber's). James M. Edmonson. 1870. Gustav Weber Collection at the Howard Dittrick Museum of Historical Medicine.

In keeping with French regulationist practices, the high prevalence of venereal disease was attributed to unregistered prostitutes who did not submit to weekly pelvic examinations. To rectify this situation, and reflective of the colonial practice of viewing all indigenous women as potential prostitutes, it was policy in Algeria that any Muslim woman could be arrested, vaginally examined, and interned on suspicion of "notoriously" engaging in prostitution. [6] Interestingly, prostitutes came to call the speculum (pictured to the right) the "miroir du gouvernement" or the "mirror of the government." [7] 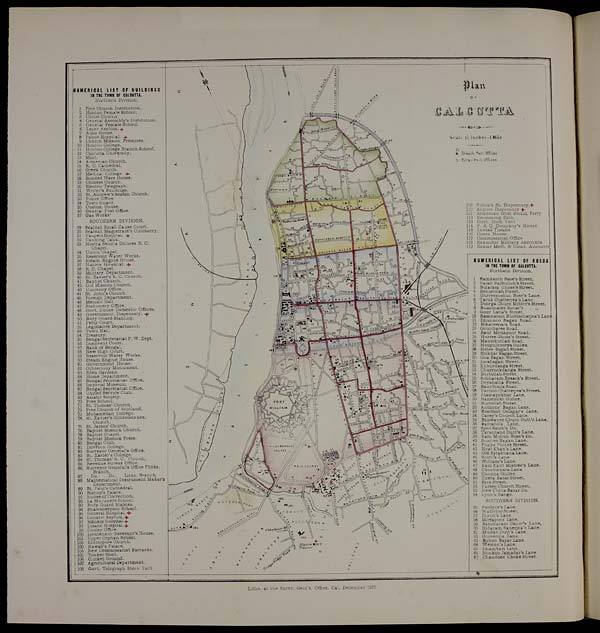 This map of Calcutta in 1873 includes the locations of hospitals, indicated by red cross symbols. Hospitals for the troops, including insane asylums, were all clustered together (buildings 95-98), but the "native hospitals" and lock hospitals were geographically separated from those used by the British, demonstrating stigma and segregation, particularly of prostitutes. For example, the native hospital (building 37) is on the Western outskirts of the city and much farther North than the cluster of British hospitals. Report on the Calcutta Medical Institutions for the Year 1873. Office of the General Surveyor. 1873, Medical History of British India, National Library of Scotland. Please click the source link in this caption for a high-quality, zoomable version of this image.

In India, as Levine argues, the framing of venereal disease as both Indian and female ties into British orientalism and their mythic creation of a ‘prostitute caste’ as well as their understandings of Indians as people without shame who need to be civilized [8]. The Contagious Disease Acts were of particular significance in the Indian situation, and as Whitehead argues, "The Contagious Diseases Act introduced a new form of bodily regulation, in which the moral division between unrespectable and respectable women in India began to be detached from a sacred social hierarchy and became, instead, expressed through Western medical metaphors of health and disease." [9] While there is ample evidence that syphilis was actually introduced to India by European armies, the medical opinion in British India at the time held that syphilis could only be transferred through vaginal secretions, placing the blame exclusively on the female prostitute and allowing British troops who contracted the disease to be portrayed as victims. [10] British legislation in India assumed the direct relationship between the fact of prostitution and the transmission of disease, and there was a high prevalance of lock hospitals (see the image to the left) and strict regulations because of this. [11] While there were Contagious Disease Acts in Britain as well, these were much less strict and coercive due to the differing views of British and Indian women.

Even within the colonies themselves, there were important hierarchies differentiating different groups of prostitutes from each other and regulating these groups differently, as the next page will discuss.