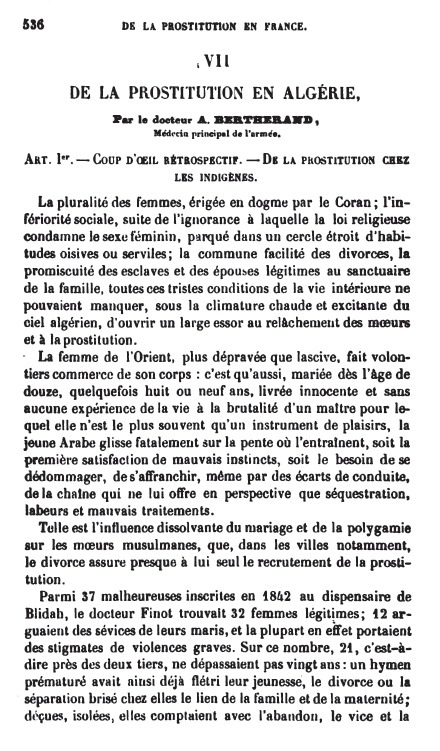 Medical interventions and STI prevention was a large part of sex work communities both in 19th century Paris, and in modern manifestations of sex work all over the world. These two images show the ways in which such prevention measures have evolved.

In Parent-Duchatelet’s depiction of the “recipe for syphilis,” which specifically explores prostitution in Algeria, he discussed the level of control exhibited in the creation of the “cure.” I was particularly interested in the specific behaviors from which infected individuals should abstain, which are “exposed to the wind, to be out in the morning or evening, to smoke, or engage in coitus,” all of which seem like activities that inherently carry an extreme amount of stigma. Both syphilis and HIV within various sex work communities show the extent to which stigma controls behaviors, even when the behavior in question in inextricably connected to medical practices.[1]

Additionally, according to an 1836 study on prostitution in Paris by a government official, certain measures were taken to ensure that sex workers were regularly accessing health care and prevention resources. They created a "health room," in which ill women, who were unlikely to seek out medical care would receive advice and treatments for free, which would allow them to care for themselves within the privacy of their own homes. This facility, called a Dispensaire de salubrité opened on December 23, 1802, and regularly treated prostitutes, but this particular study had yet to see the results of such a service.[2]

Within modern safe sex movements, there has been a significant push for increased agency over space and body, which has yielded increased access to HIV prevention services goes up, according to UNAIDS. The UN, specifically, employs a human rights based stance which focuses on every person's right to access care despite criminalization of sex work. Their goals for official prevention are: “1: Assure universal access to comprehensive HIV prevention, treatment, care and support. 2: Build supportive environments, strengthen partnerships and expand choices. 3: Reduce vulnerability and address structural issues.”[3]

Though autonomy has been emphasized in some spheres, a lot of prevention methods ignore wider social and economic issues when addressing prostitution, which is uniformed and ultimately not useful[4]. As the international community is banding together to decrease the prominence of HIV and other public health concerns, the visibility of diverse communities and manifestations of sex work is becoming increasingly ignored. Further, forced healthcare testing is both condescending and a violation of human rights, by treating sex workers as an illegitimate piece of the labor force (Playing the Whore). Healthcare services are often treated as a means to protect the customer as opposed to a necessary service that all individuals contributed to the international workforce should be entitled to receive. Additionally, stigma, criminalization, and policing all have a negative effect on sex workers’ ability to access and use healthy practices when doing their work.[5] The above image depicts an organization’s attempt at education, which often yields misplaced condescension, but at times reaches individuals in need of safe sex education.

What has stayed the same:

Contemporary and past versions of health intervention boast the existence of free clinics, which allow sex workers to access the care they need, without limiting their privacy. Though these have good intentions, they often inadvertently exclude the populations that most require healthcare. Additionally, many of these resources of speculative, which reflects the stigma attached to sickness, sex work and the conflation of the two. Both iterations of prevention have lead to increased stigma among international communities and their understandings of sex work.

A key difference between the two prevention techniques is the existence of medical knowledge that people have today, and the lack thereof from 19th century Paris. Additionally, current prevention methods are based on pre-emptive care and prevention, as opposed to past methods which were more rooted in potential cures and regimens, and folklore used in an attempt to stop sickness from leading to more serious medical ailments or death.