VII
On Prostitution in Algeria
By the doctor A. Bertherand
Chief Doctor of the army

The plurality of wives, a dogma of the Koran; social inferiority, because of the ignorance in which religious law condemns females, confined to a narrow rut of habitual idleness or menial studies; the common ease of divorce, the promiscuous mixing of slaves and legitimate in the sanctuary of the family, all these sad conditions of domestic life could fail under the hot climate and exciting Algerian sky, throwing it open for the relaxation of morals and prostitution.

The woman from the East, more depraved than lascivious, willingly trades her body: It is also that she is married at the age of 12, sometimes eight or nine, delivered innocent and without any life experience to the brutality of a master for she is at most an instrument of pleasure, the The Arab youth inevitably slips on the slope of her training, which is first the satisfaction of bad instincts, then the need to compensate, or overcome, even by wrongdoing, the shackles that confine her sequestration, labor and abuse.

Such is the corrosive influence of marriage and polygamy on Muslim morals, whether in tribes or cities, divorce almost single-handedly ensures the recruitment of prostitutes.

Among 37 unhappy women listed in 1842 at the clinic in Blidah, Dr. Finot found 32 married women; 12 alleging abuse from their husbands, and most indeed bore the marks of serious violence. Of that number, 21, that is to say nearly two-thirds, were not older than twenty years: premature intercourse had already withered their youth, divorce or separation had broken their homes, the bonds of family and motherhood; frustrated, isolated, they hoped with abandon that vice and the 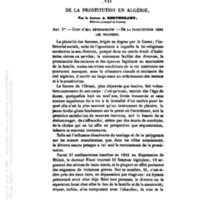