Sir, When cholera was in Paris and throughout France everyone was afraid. 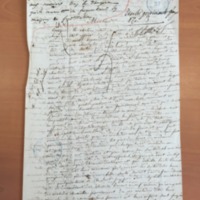