Morality and Depravity: The Effect of a “Tropical Climate”

Both Algeria and India had drastically hotter, more tropical climates than the countries that colonized them. In the context of morality in general and prostitution in particular, France and England conceptualized these hot climates as the cause of what they perceived to be lax morals, inferior cultural practices, and an abundance of prostitution. Alphonse Bertherand, a French surgeon who accompanied French forces into Algeria, wrote a detailed report on how prostitution functioned and was regulated. [1] This report was included in an edition of On Prostitution in the City of Paris, and the opening paragraph directly links social problems in Algeria (including prostitution) to its tropical climate: 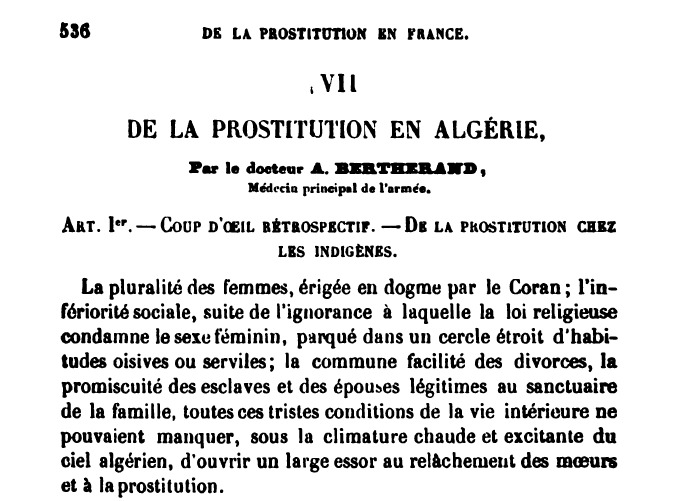 The plurality of wives, a dogma of the Koran; social inferiority, because of the ignorance in which religious law condemns the female sex, confined to a narrow rut of habitual idleness or menial studies; the common ease of divorce, the promiscuous mixing of slaves and legitimate wives in the sanctuary of the family, all these sad conditions of domestic life could not fail, under the hot climate and exciting Algerian sky, to upon up a wide relaxation of morals and prostitution.

In this passge, Dr. Bertherand identifies Algeria's social problems and points to tenets of Muslim culture (as he perceives it) as their source. Together, these problems result in a lack of morality in Algeria, creating the perfect environment for prositution to thrive. In addition to citing Islam as a source for depravity among the Algerians, Dr. Bertherand explicitly cites the "hot" Algerian climate the catalyst for Algerians' relaxed morals and the prevalence of prostitution. 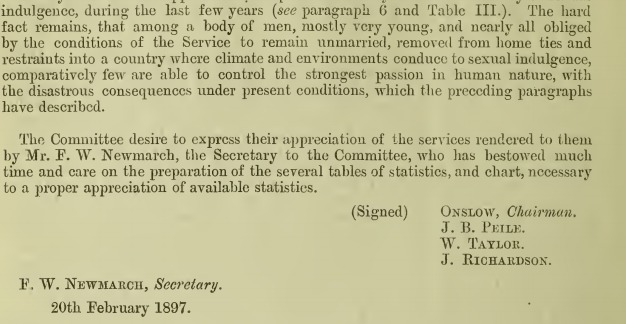 The conclusion of a report conducted in 1897 by a departmental committee outlining the prevalence of venereal disease among British troops in India. George Hamilton. 1897, Royal College of Physicians, London.

In British India, we see similar rhetoric in a report conducted for the queen by a departmental committee trying to explain the extremely high rates of venereal disease among the British troops. [2] In this case, the hot climate is not only responsible for the “sexual indulgence” of indigenous Indians, but also has the power to relax the morals of British troops in India, weakening their ability to “control the strongest passion in human nature.” While the common soldiers were viewed as lower and more likely to experience moral lapses, as Philippa Levine argues, “It was consistently the East, rather than colonial domination or the overtly aggressive ethos of the military, that was ultimately responsible, luring weak and undisciplined youngsters to its beguiling but unhealthy ways.” [3]

As the next section will discuss in more detail, doctors also believed the climate created a “tropical syphilis,” which was believed to be more dangerous than the European strain.

[2] Parliamentary Papers, House of Commons, 1897 (C.-8379), Report of a Departmental Committee on the Prevalence of Venereal Disease among the British Troops in India, p. 14.

← Introduction: Colonialism in India and Algeria
Regulating Bodies, Regulating Venereal Disease: The Syphilitic Arab and the Diseased Indian Woman →
Morality and Depravity: The Effect of a “Tropical Climate”